Prenuptial and Postnuptial Agreements in Nevada 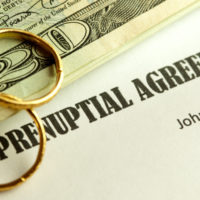 Prenuptial agreements are quite popular in Nevada and the nine other states with community property laws. Community property rules are rooted in Spanish law, and they are most often followed in western states that once fell under Mexican control. While family law judges in equitable distribution states are given a certain amount of discretion when deciding how marital property should be allocated, those in community property states like Nevada must generally divide marital assets and debts equally. This can seem particularly unfair when the marriage concerned did not last very long or where one spouse was responsible for the majority of the couple’s debts. Critics of these laws say that they sew the seeds of mistrust and fear among married couples and may put some people off getting married altogether.

Nevada residents who wish to marry but also wish to protect themselves from the community property laws may choose to enter into a prenuptial agreement with their fiancé or fiancée. Already married couples seeking this protection could ask a Nevada divorce law attorney to draft a postnuptial agreement. These agreements allow couples to decide for themselves how their assets will be divided should they later decide to divorce. Prenuptial and postnuptial agreements may also contain provisions dealing with the way that the couple’s debts will be treated and how much spousal support or alimony will be paid.

With almost half of all American marriages ending in divorce, entering into a prenuptial or postnuptial agreement would seem to be a prudent step to take for even the most diehard of romantics, but these arrangements have developed a somewhat unsavory reputation in some quarters largely due to media stories about wealthy celebrities leaving their ex-husbands or ex-wives with very little. While this may be enough to deter some, others like the idea of a prenuptial agreement but are afraid to even broach the subject with their fiancé or fiancée for fear of starting a major row.

Experienced divorce law attorneys, like the ones here at Ghandi Deeter Blackham, could dispel both of these objections by pointing out that prenuptial agreements could actually help to make a marriage stronger by reducing or eliminating the fear and anxiety that can undermine even the strongest of union. Family law attorneys could also point out that grossly unfair agreements of this kind may not be valid under Nevada law.

Nevada is one of 27 states that has adopted the Uniform Premarital Agreement Act, which was drafted in 1983 by the Uniform Law Commission. The intention of this law is to bring a degree of consistency to the rules regarding prenuptial agreements and how they treat such matters as the division of property and spousal support. Child custody, visitation and support arrangements cannot be included in a prenuptial or postnuptial agreement as they are considered to be matters of public policy and are decided based upon what is considered to be in the child’s best interest.

While prenuptial and postnuptial agreements are permitted by Nevada law, they may be ruled invalid if they were not signed knowingly or if one of the spouses concerned was coerced into signing. Oral agreements of this kind are not recognized in Nevada. These documents could also be unenforceable if it is discovered that one of the parties involved concealed assets or otherwise bargained in bad faith.

To request a consultation concerning a Prenuptial or Postnuptial Agreement please call us at (702) 825-7748 or fill out the form on the right.